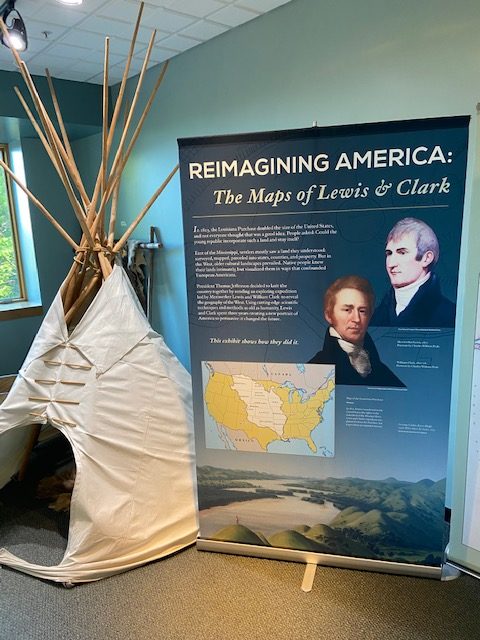 A unique exhibit entitled:  “Reimagining America: The Maps of Lewis and Clark” is now on display at the Lewis & Clark Center in Nebraska City.

It consists of 15 panels 7′ tall and 3′ wide which extend for 60 linear feet along the walls of the lower level of the Center. It is professionally done based on the research of experts commissioned by the Lewis & Clark Heritage Trail Foundation.

This traveling exhibit will be on display in Nebraska City until June 30. This is the third of eleven sites where it can be viewed in 2021 and 2022. Its next stop is in Montana.

The historic maps, photos and explanatory texts show how the land we now call Western America was envisioned before Lewis and Clark explored it. And how William Clark drew the incredibly accurate maps of where they had been.

Lewis & Clark used cutting-edge scientific techniques and methods as old as humanity to describe the 2,000 miles of rivers and land from St. Louis to the Pacific Ocean.

The exhibit shows what Lewis & Clark learned from the Native Tribes who had been living along the Missouri River and Columbia River for hundreds of years, the inaccuracies of what British cartographers had speculated about the land, and how Lewis & Clark used several different techniques to create a map that would be used for the next 50 years by fur trappers and pioneers who followed their trail to the West.

The Missouri River Basin Lewis & Clark Interpretive Trail and Visitor Center is located on Highway 2 on the southeast edge of Nebraska City overlooking the Missouri River.